Lists? What lists? Oh, those lists.... - Next Action Associates
0 Items

Lists? What lists? Oh, those lists…. 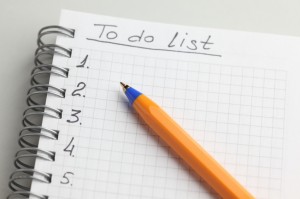 Years ago, when I was only a GTD baby, I remember one of the GTD grown-ups saying something like:

“Anyone can do the inbox thing. It is what happens once the inbox is empty that is what really counts.”

As someone who – at that point – was not yet consistently able to do ‘the inbox thing’, these were strange words indeed. Many years later, I think I understand.

Sometimes I hear from clients that they are staying on top of the day to day incoming in their digital and physical inboxes, but that once they’ve finished processing there is not often time to get over to the lists they’ve created – to take care of the things that are not urgent or less than 2m actions.

I think there are a few reasons for this. For instance, almost by definition, what is on the lists is not as quick/easy to handle as what is in the inbox, so there might well be some natural human reticence to going over to the lists and getting stuck in.

Similar to being able to ‘do the inbox thing’, I see this as one of the thresholds in the GTD journey, and I see a few solutions that seem to work. Here are some that I’ve used, or seen others using effectively:

· Be sure you are actually emptying out the inbox. This sounds obvious, but if you are consistently leaving a few bits of ‘stuff’ there then the tendency is always to get drawn back there first, rather than getting to the lists. Only when there is nothing to find in the inbox do we really face the challenge of prioritising from the lists.

· Be rigorous about the 2m rule. If you don’t have time to get to your lists, then part of the problem is perhaps that you are taking too long with your processing. If the 2m rule becomes a 5/7/10 minute rule, then a dozen substantial e-mails in a day’s processing will chew up time in a way that means there is no time left to work on the lists. This is a bit of a catch-22, because if you don’t trust that you’ll look at the lists each day it is hard to put things on the lists that require immediate attention, so you have to spend the time handling them in the inbox, and then don’t have time to look at the lists.

· Go to the lists first for an amount of time. Another strategy that I’ve seen employed successfully is to do some emergency scanning of new stuff first thing, then close the inbox and go work on the lists until a certain time, or for a certain amount of time. As mentioned in an earlier blog about sinking or swimming in work, I guess-timate about an hour per day (on average) of chipping away at the lists is what it would take to feel that you were really moving forwards on important things.

· Don’t hide the lists on yourself. This is pretty individual, so here are some options: make your list programme the default for when you open your device or software; if you have two screens, keep your lists open on one of them so they are visible; or, print your lists off and carry them around with you.

· Create real time to work on the lists. As above, by definition, what is on the lists is not as quick/easy to handle as what is in the inbox, so there is often a need for more time to ‘think my way into’ the task at hand. I’ve recently found that for some things I need large chunks of time just to get my brain ready to work on them, and then to actually get them done.

Finally, when all else fails…

· Trust your intuition. Though it kind of counters everything I just wrote, it is worth considering that you are doing precisely the right thing. If you are doing a weekly review of all the lists, and are consistently prioritising other things (and nothing major is blowing up on you) – perhaps what is on the lists is not as important as what you have been doing. Only you can know that for sure.

Blog done. One list item down. Time for a celebratory dip into my inbox to look at the shiny new stuff that has just arrived….