The Nitty-Gritty – Clearing Out Your Inbox

One of our biggest fans complained a few weeks back. After years of positive feedback about these blogs, he took the time to let us know that he was not satisfied with one of them as he did not feel it was specific enough about what he should actually do as a result of reading it.

Upon reflection, I believe his comments point to a larger problem: as someone who spends much of each day in the GTD® trenches, I can be afflicted with what has been called ‘the curse of knowledge’. I know a lot about GTD, and – somewhat blinded by what I know – I sometimes struggle to remember that others are not seeing the picture that I see, completely forgetting that the GTD picture I am seeing has been painted and filled in over the past nine years.

My picture is, of course, a much different picture than someone is seeing after nine months, or nine days. What they are seeing is more like a sketch, and many of the connections are missing that are apparent when all the lines have been joined up and the colours filled in.

So often I write my blogs thinking that those who read them would not be keen if I simply repeated the basics of getting on top of their work.

Instead, I’m usually looking for interesting metaphors to illustrate sometimes abstract principles, and I’m forgetting that some readers are fairly new to this game and really just wanting to know about the fundamentals of collecting, processing, and organizing their stuff.

So, here, in response to a very constructive – and gentle – complaint, is a quick how-to on how to process an inbox to zero:

·         Protect some time – to process the new ‘stuff’ that comes in each day, you’ll need about 45-75 minutes each day. Not necessarily in one block, but as a total spread through the day. If you don’t protect this time to think about new stuff then do not be surprised when you are overwhelmed by your inboxes.

·         Choose your moment – this requires focus and energy, so there is no point in trying to do it when you are too tired. Better to leave it in ‘in’ (where you know it will wait for you) for a time when you are feeling fitter.

·         Avoid the Sisyphus Shuffle – just as Sisyphus was trapped rolling a boulder up the hill and having it repeatedly roll back over him, constantly jumping back up to the top of your inbox to look at the last thing that arrived means you’ll be much less likely to get to look at the oldest, and you’ll probably just confuse yourself with too much information on a variety of topics rather than staying focused on one thing until you have finished the thinking on it. 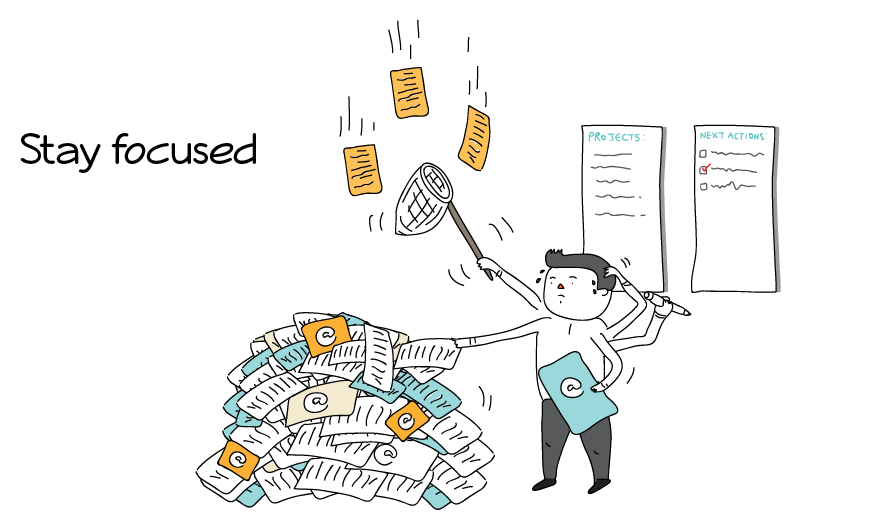 ·         Start at the top – take the first paper / first e-mail / first whatever it is, and start there. You could start anywhere, of course, but jumping around all over the place often leads to avoiding the challenging things.

·         Go one at a time, until you are at zero – simple to say, more difficult to do. Ask the simple questions we suggest: What is it? Is it actionable? etc. Just stay with them until they are thought through, the reminders are put into a system, and the originals either deleted or filed. One. Thing. At. A. Time. Your brain will love you for this. 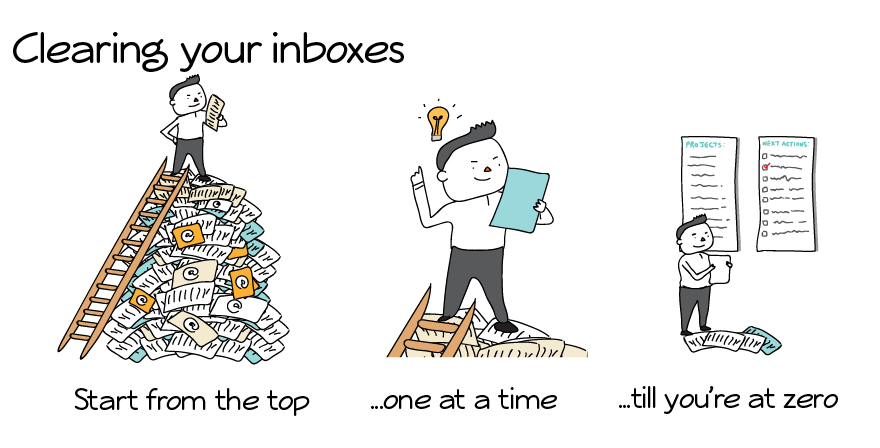 ·         This is about thinking and deciding, not doing* – think each thing through, and make the decisions that you can make, given your current circumstances. We strongly suggest you don’t allow your thinking to result in next actions that start with ‘think about x’ or ‘decide about y’. Thinking and deciding is what you are doing now while you are processing. Otherwise you’ll just have well organized ‘stuff’.

*apart from the 2 minute rule

·         Go slow to go fast – this process might feel slow at the start, but if you continue two things will happen: you’ll get much faster at it, and – no matter how slow it feels in the beginning – you’ll be able to move like a rocket once you are working on lists that are clustered by place or by tool. 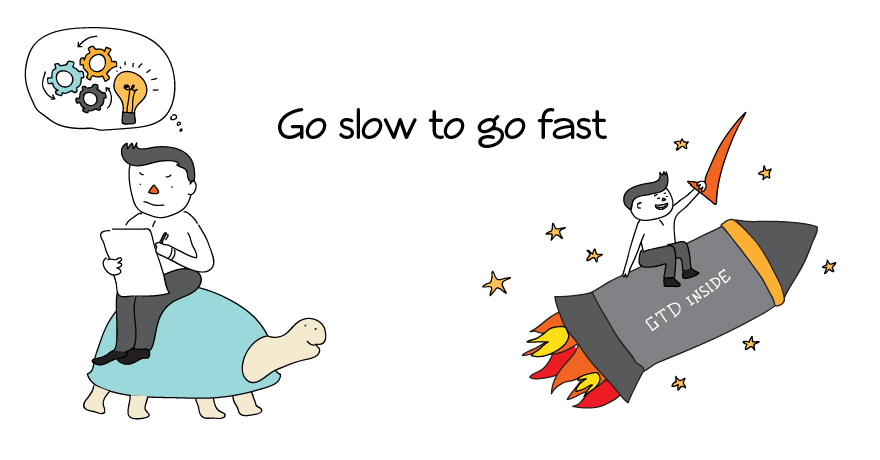 Visual metaphors and illustrations by: