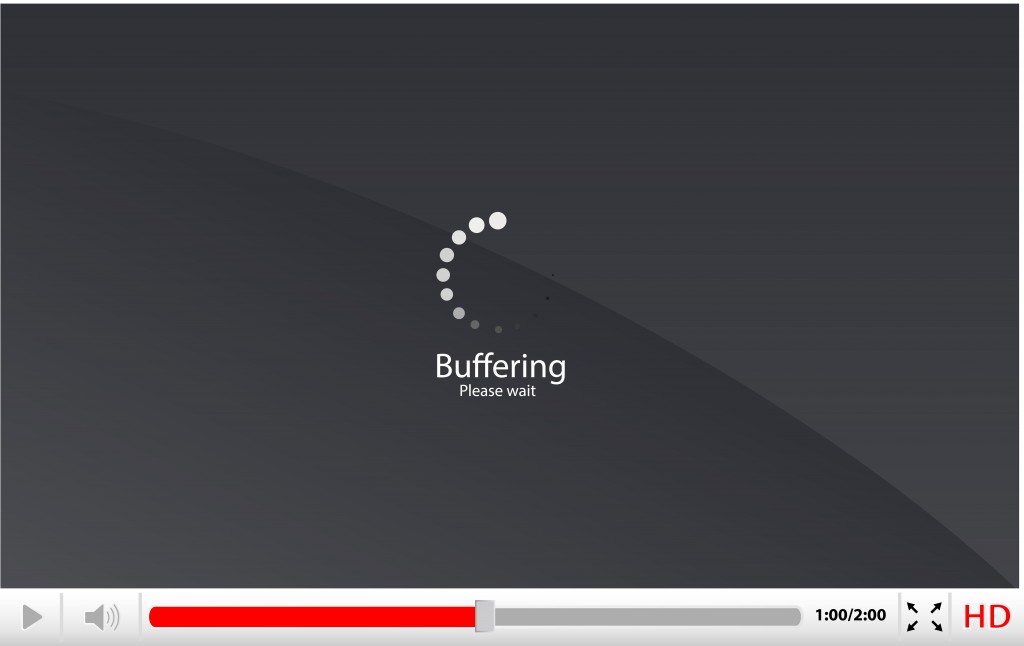 For the inveterate movie hound that I am, the streaming of movies over the internet seems a huge leap forward for our civilization. No more clicking through several hundred channels of an evening to find a speck of gold in a mountain of televisual dross; now I can tap through thousands of films on my iPad to find a somewhat more self-selected speck.

The savings of time in making my selection are – it is true – not enormous, but from a user-control perspective, Netflix, Amazon Prime, et al are fabulous.

Most of the time.

When it works well, I start the film and there is a brief pause as the app starts to pull the movie down off the server, creating a ‘buffer’ of film on the device. Importantly, it doesn’t have to pull the entire film off the server before it starts to show it to me, it only needs to pull down enough of it so that – if the connection slows for a bit – it can show me the what it has in the buffer, and not have to interrupt my viewing enjoyment while it waits for more of the film to load.

When it works, it is wonderful. When it doesn’t…. Well, let’s just say it is a good thing I like my iPad a LOT, otherwise I’d have long since embedded it in the wall opposite the sofa.

When the little buffer symbol appears at a dramatic highpoint of a movie – stopping the action entirely – it is not a happy place to be in my head, but it does afford some time for reflection – and not just on which wall to throw the device at. Sometimes – given the speed of streaming over the Victorian era copper wires in central London – it goes on for long enough that I can even calm down and think of other things. During one particularly long stoppage recently, I got to thinking of the virtues of that buffering mechanism (when it works), and how important the concept of buffering is in other areas of life as well.

What I realized was this – living without a buffer, in almost any area of life, can be a deeply unpleasant experience:

·         Without a financial buffer, you can quickly end up on first name basis with the local bailiff, and drowning in offers of usurious new credit cards to transfer old balances to

·         Without a buffer of restedness, our thoughts go much more quickly and easily from bright, to grey, to black

·         When our emotional reserves are gone, we are much more likely to explode at insignificant events at inappropriate times

·         Even in relationships, we rely on a buffer of stored up demonstrations of low self-orientation to get us through periods where things get very difficult between us

And yet, in the domain of our calendar, we often throw out all the common sense we use in other areas of our life. We book meeting after meeting after meeting, and leave no time to get from one room to the other. In many high rises, travel time between floors can run to 10 minutes, so if you are leaving at the end of the hour, you are guaranteed a late arrival in your next meeting. And the one after that. And so on.

A day without buffer time can quickly end up being a long series of failures (if arriving on time for things matters at all in your world) and – with no time for quick body breaks – lead to a chronically distended bladder.

Indeed ‘buffer’ is almost an inappropriate word for it. I often need that clear time between meetings to scribble a few notes about the previous meeting, capture commitments made by me and to me so there is some hope of tracking them to completion, and to get centred for my next meeting.

So, if you want to have a bit more buffer time in your life, here are three things I see that can help:

·         Get real about time and space, and stop booking everything back to back. Instead, book your meetings in 25, 50, 80 and 110 minute slots. Some people will comment, but most understand and are grateful for the clarity of an end time that allows them to make their next meeting

·         Prepare to be surprised. Surprises are pretty predictable these days, so if you are not preparing for them (by leaving some slack in your day) then you are effectively committing to live in overwhelm for the rest of your days. Good luck with that

·         Do a Weekly Review, and use part of that time to go through the next two weeks in your calendar with a fine-tooth comb. Get out your inner sociopath and be ruthless; day by day, hour by hour, hunt down and eradicate overlong meetings, things that someone else should be taking care of, meetings you should have said ‘no’ to in the first place. Every week I find something in the next week that can go, and many weeks it adds up to a substantial number of hours

With buffers in place, moving through my day is a completely different experience. I can be where I am, enjoy the travel time between meetings, and even smile at people I see along the way. It feels like a productive, pleasant experience.

Buffer your life, then enjoy the flow.