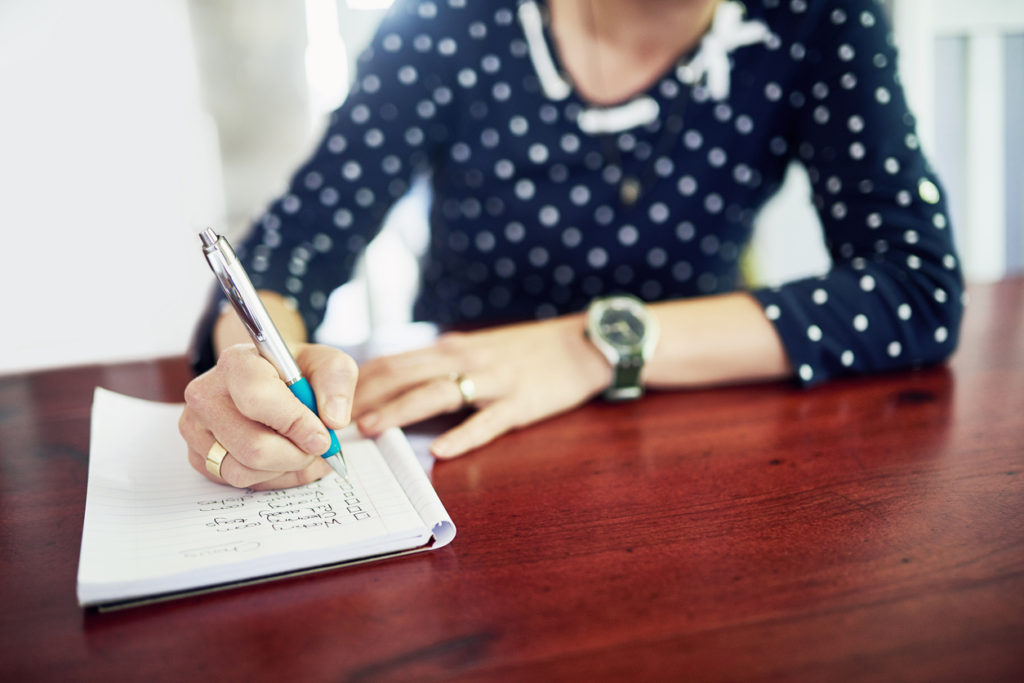 David Griffin is a senior consultant at Cambridge based 42 Technology, which offers pragmatic engineering innovation, design and development services to clients in a range of industries. He first started with GTD in 2003, when Palm Pilot devices were no longer cool but not yet antiques.

Now, with three children at high school and seven pets (including three reptiles) he counts on GTD to stop his head exploding. His hobbies include cycling, snowboarding, long walks with a crazy spaniel and trying to avoid the news.

David is currently working towards becoming a certified GTD trainer.

GTD is, at its heart, about getting things out of your head and into a series of trusted lists.

One attendee at a recent seminar therefore tried to sum up GTD as “so it’s just about making lists?”. In fact he’d have been closer to the mark if he’d said “it’s about making good lists”. To understand what a good list is, however, you really have to develop some awareness of what makes a bad list.

Many people have spent years making bad lists and not realising it, and as a result think that lists cannot be the solution to their stress and overwhelm, yet those same people have also been making perfect lists in particular areas of their lives.

Here’s a real example to illustrate the point.

Imagine that it’s a nice summer evening and you’ve invited some friends round for dinner and you need to go shopping for food. You make a shopping list and head down to the supermarket. As you walk down the aisles, you check off items as you find them, until the list is complete.

The list may contain items such as “two bulbs of garlic” or “three tins of chopped tomatoes”. Simple, actionable items, with very clear meaning. You know what these items mean, and it’s clear when they’re done.

Let’s look at some of the things that shopping list won’t contain.

It won’t say “lasagne for seven”. Such an item would be really unhelpful to a person standing in the crowded fruit and veg aisle of Tesco, because it requires a lot of thinking before it yields anything actionable.  Instead, you will have done some clarifying at home before leaving for the supermarket.  You’d maybe have consulted a recipe, multiplied some numbers to arrive at the correct quantities for seven guests, even checked in the cupboards to see what you already have in stock at home. In other words, you’d do all the thinking up front, resulting in clear actionable items that won’t need any rethinking when you get to the supermarket. You’ve in effect been kind to your future self, the person who’ll be running round a crowded store with shopping trolley. If you’ve done a good job, you could even delegate the list to someone else, with no fear of a misunderstanding.

Another thing the list won’t say is “four paving stones”. You might actually need paving stones, but this is a context-sensitive list. It’s a list that’s just for the supermarket, and you don’t want to find yourself in the fresh meat aisle re-thinking whether an item on the list in front of you even applies to your current situation. If anything, “four paving stones” belongs on a different list, the one for the garden centre.

Another thing your ideal shopping list won’t contain is a selection of things to buy for Christmas dinner. True, you will want to buy these things in the future (you may even have been really organised and planned the meal months in advance), but if they’re not for buying now, they don’t belong on the list you’re carrying into the supermarket today. Again, you don’t want to be looking at items on the list and wondering if a thing on it needs buying. The list should have a simple clear meaning – “buy all these things” – so that no further thought is required.

Now, I’m sure you’re thinking “these examples are daft, nobody would ever do this”. And it’s probably true, few people would do these things with a food shopping list. Most of us have developed very good processes for clarifying an outcome such as this and producing an excellent functional shopping list (whether we ever consciously thought about it or not).

But on general day-to-day to-do lists, people do these bad things all the time. They write items like “Mum’s birthday” and “Car servicing” on the list and then when the time comes to get something done they look at the list (like a person who’s just seen “lasagne for seven” on a shopping list) and they have to think what it actually means before they even decide whether they can do anything about it. And then if they don’t make it happen now, they’ll repeat all that thinking the next time they look at the list.

The problem is that these lists are not really “to-do” list at all. They are raw, unrefined thoughts that need to go through some processing before a list of actionable tasks emerges.  And because people don’t routinely separate their lists by context, they’re frequently wasting brain cycles scanning all the items relating to paving stones they can’t buy right now.

This act of processing into actionable, context-sensitive lists (which in GTD we call Clarifying and Organising) is something we all already know how to do for shopping lists, but something we may initially have to work at before it becomes second nature in other areas of our lives, especially when the outcomes are a bit more complex than making a lasagne for seven.

But the good news is, anyone can learn to do this. You really can learn to turn all the things you need to make happen into a series of clear actionable tasks that require no rethinking when the time comes.

And your future self will love you for it.