The elephant in the room - Next Action Associates
0 Items

The elephant in the room 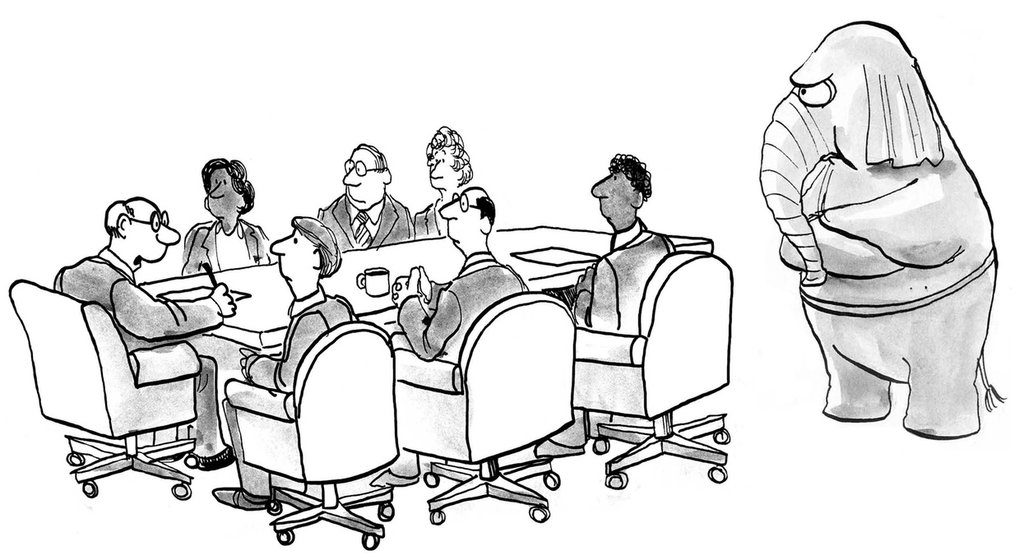 Fifteen minutes into the meeting my former colleague’s eyelids had become heavy. Soon after, they drooped, fluttered, then gently closed. Yet despite the circle of smirking faces around the conference room table, nobody said a word.

The elephant in the room could have plunged his trunk into the coffee and sat his big grey backside down on the chocolate digestives and still, with consummate Englishness, there would have just been an awkward silence.

We’re all accustomed to the signs that people aren’t as engaged as they might be in meetings. Usually it’s less obvious than sleep – the stifled yawn, the fidgeting, the surreptitious checking of email, for example – but nonetheless, poor meetings are something we often put up with, accepting that it’s just an aspect of organisational life that must be endured, like the loud co-worker or the long commute.

One way that GTD can enable snappier and more focussed meetings is through the use of ‘Agenda’ lists. We usually describe these lists as buckets where you can collect your talking points until one-to-one conversations happen with the key people in your world, and they often strike a chord with people who have implemented the methodology.

I recently heard a client describe one-to-one catch-up meetings with a direct report who uses GTD Agenda lists as being like ‘machine-gun fire’. While, on the face of it, this doesn’t sound like the kind of experience that helps you along the path to stress-free productivity, what he actually meant was intended as praise because his colleague always came to meetings highly prepared. He’d always bring a complete and current list of conversation topics that they could rattle through with minimal filler and fluff, and it enabled both parties to walk away feeling satisfied, knowing the time had been well-used and that everything had been covered.

Group meetings can benefit in a similar way, not only in terms of agenda completeness but also in terms of agenda clarity. Too often, meeting agendas exhibit the vagueness of the traditional ‘to do’ list, and will need to be tackled ‘cold’ in the meeting because people don’t know, ahead of time, what things mean. For example:

When the agenda is this general, it’s going to take some extra work for someone to come primed and ready…

“I heard a rumour that project X has been delayed. Is that what this is about? Has there been a change to the appraisal process? I wonder why we’re talking about the annual conference so early?”.

They could, of course, fire off an email, make some calls and work it out with a bit of digging, but if time is short, they’ll probably just wait and see, knowing full well that others will arrive knowing just the same as them; i.e. not much.

So, instead of that, how about applying some next action thinking and giving the agenda a makeover to something that looks more like this…:

By being more specific about what exactly is going to happen in the meeting, not only does it become easier to cut to the chase, but it also becomes more likely that your attendees will be able to input more meaningfully because they know what’s coming their way.

“The team and I had a bit of a chinwag about the annual conference and we quite fancy getting in Richard Branson and Barack Obama. What’s the budget again?”.

Better agendas will result if you’re capturing discussion points ahead of time in agenda lists and clarifying them as you would any other GTD list to really identify what needs to happen when people meet. As a result, you’ll have a better chance of seeing energy, focus and engagement.

You’ll also ensure that machine-gun fire is just a metaphor for high-performance meeting behaviour rather than a way of waking anyone who’s dozed off.