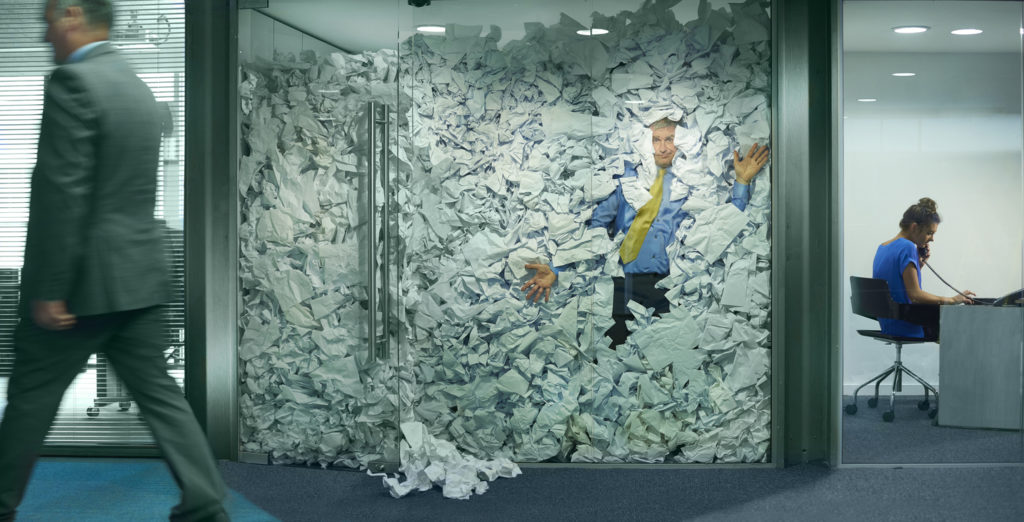 I was at a dinner party recently where the conversation – implausibly – turned to ‘paperwork’. We’d exhausted topics like real-estate trends (luxury – in; affordable – out), our ongoing Circus Brexitus, and the ambient geo-political madness. Things had clearly gotten desperate, topic-wise.

I know what you are thinking. It wasn’t a party I particularly wanted to be at either.

Anyway, we got rolling on the paperwork thing after one of the guests mentioned he hated it because it got in the way of his creativity. A woman across the table grabbed the baton and launched into a diatribe about how it was all bureaucratic nonsense. Paperwork – in her world – was life-extinguishing ‘work of the devil’. Another table mate chimed in with what he clearly considered a brilliant solution: he inspected envelopes as they arrived and only opened things that were obviously invitations to parties, or cheques, but left everything else unopened. Our host confessed that the stacks in his office had become so big that they had become a fire hazard. Cue much hilarity.

Not wanting to be the proverbial vegan at the barbeque, I smiled politely and kept schtum. Any pearls I might have cast before these porcine companions would not have been received enthusiastically.

Here’s the thing: paperwork is – of course – not all things that arrive in paper form.

As our friend with the invitations and cheques had established, paperwork, as they were discussing it, is work that arrives in paper form that they didn’t want to do. Bills to pay, friendly reminders from tax authorities, speeding tickets, etc.

Oddly, what they were calling paperwork is not even always on paper. There are plenty of digital things that I don’t want to do either. E-mails announcing gnarly problems, for instance, or with attachments that take time to decipher. For many of my dinner companions these too are left unopened (or – worse – opened, closed, and marked ‘unread’ today, as a reminder to do the same again tomorrow).

In my experience, there are two types of people who have problems with ‘paperwork’:

So, is paperwork really the creativity killing child of Beelzebub that my dinner mates were complaining about? I’m not convinced.

For me, handling paperwork, in whatever form it arrives, is simply about dealing with reality as it shows up. The challenges the ‘paperwork’ represents really do exist. I can pretend they don’t, but that doesn’t make it so. I either deal with them now, or deal with them later. I either kill the dragon when it’s small, or try to talk it out of burning my house down when it is fully grown.

Or – to paraphrase the old Buddhist saw – chop wood, carry water, do your paperwork.