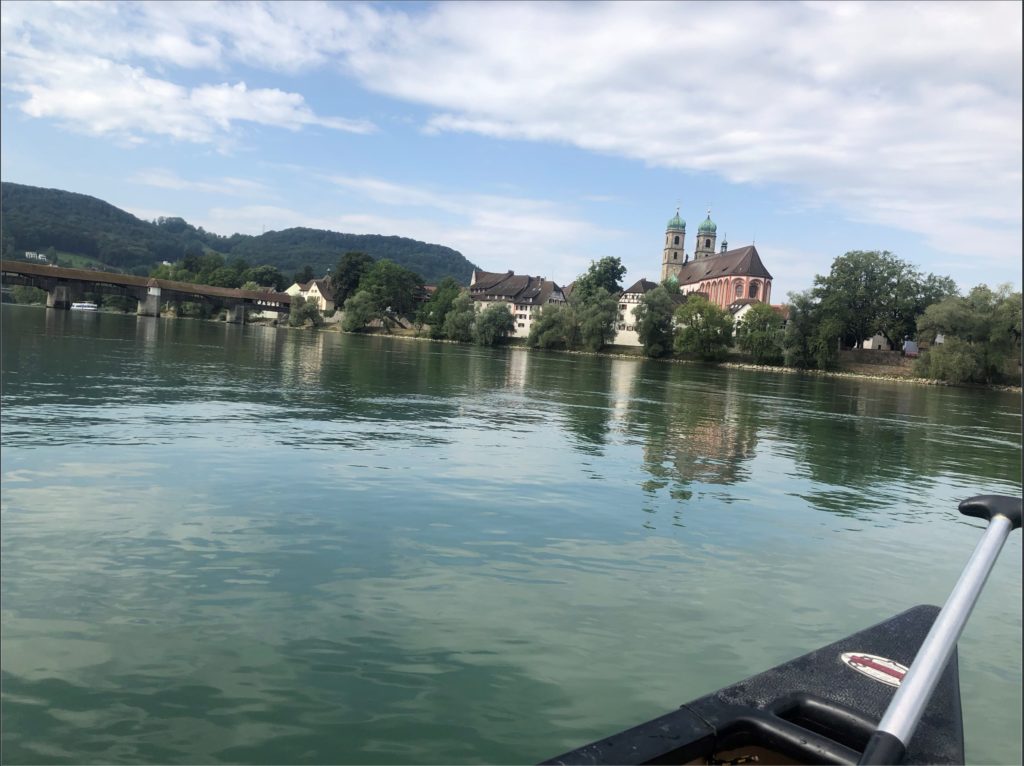 Again? Can’t be. We stopped paddling to allow ourselves to focus. Sure enough, there they were: an older couple, drifting along in their inflatable canoe. Ahead of us, again.

My canoeing partner and I exchanged minor expletives under our breath. We were about 90 kilometres into our trip and we’d seen them a few times already, usually as we paddled past them at speed. But every evening, when we pulled over for the night, there they were, tent pitched, showered, ready for dinner. Huh?! As we’d spent all day paddling our arms off in a much more hydrodynamic canoe, we were seriously perplexed.

This time, we couldn’t contain ourselves. “What’s the secret?”, my canoe-mate shouted as we passed them again. “We never see you paddling, but you always seem to end up ahead of us.”

Big smiles from the other canoe, and the woman answered: “We just go with the flow.”

We knew that smiling back was the right thing to do, but our hearts weren’t really in it. We paddled on and left them behind one more time. But the exchange stayed with me.

The ‘river-of-life’ metaphor has always made sense to me, but it takes on new meanings when you are actually living out on the river as opposed to watching it pass you by from the shore.

In the course of the week, a few things became obvious. The first was the power of the river. Such a huge mass of water pulling you inexorably downstream is both terrifying and awe-inspiring. Our paddling, relative to the power of the flow of the river, was not the primary force in play. Not by a country mile. Given the power of the river, the only thing that makes any sense is to align with the flow. Whatever paddling you do should be to manoeuvre the canoe into that flow, to harness its power. Fighting it rarely makes any sense, given the scale of forces at play, and the marginal gains in speed from simply increasing power and stroke rate are best saved for critical situations.

That’s not to say that it is not worth paying attention to how you are paddling. In a day where you are going to repeat an action thousands of times, it will make sense to focus on how you are taking that action, and to look for any efficiencies available.

But in our lives most of us are way too focused on our paddling, metaphorically speaking. We often focus on cranking through our tasks, rather than taking enough time to get strategic with them. But even a ton of well-intentioned, well-executed action isn’t worth a row of beans if it is not pointed at the right goals. Doing lots of things offers some solace in a busy world, but is not as good as doing just a few of the right things.

Without torturing the metaphor too much, whatever paddling one does is not being done for it’s own sake, but in service of where one wants to go. Particularly on stretches of river with a lot of rapids, one needs to be focused at least 200-400 metres out to be sure to spot the right way through the turbulence. What you want to do is use the paddling to get to the place where the river is flowing deepest and fastest, and let it do the work for you.

What does that look like in real life? Well, as a consultant who has worked in hundreds of companies, in dozens of industries, in many different countries, it seems to me that much of our ‘personal success’ is inextricably linked to where we chose to apply our effort.

On a macro level, if you work in a company that is rationalizing, life will be challenging. If you work in one that is growing, you have a lot more possibilities – and it can be a lot more fun. If you choose an industry that is mature, it is a different game than if you are in an industry that is growing. At a national level, the country you choose – and often even the region in that country – matters enormously in terms of return on your invested time and available energy.

On a more personal level, I’m aware that I can mistake a lot of activity for right action. I engage in an active – but actually quite lazy – cranking through my task lists, when what is needed is more time making sure my actions are pointed at goals I’ve identified in my higher horizons. Or I can end up overworking with old tools because they are familiar, rather than taking the time to get to grips with new and more effective ones. I send another follow up e-mail rather than pick up the phone because the former is safer. And so on. You’ll have your own versions.

It was only after the trip that I realized that there was another learning available from the river. There has been a significant shift in our collective flow over the past months. To paraphrase Cormac McCarthy, if it ain’t VUCA, it will certainly do until VUCA gets here*. What felt like a pretty tame old river has turned into a seriously unpredictable torrent.

When I’ve been most tired and stressed these past few months, I think it is because I’m wasting energy resisting the new flow. I’ve paddled hard to get back to a predictability I was used to rather than accepting that I’m in a new and different part of the river. But paddling like I did before isn’t appropriate for the current flow.

There may be rapids, but the river will not go backwards. I can relax into that. As the woman said, “Go with the flow.”

What she didn’t say was that there is a lot more to doing that well than just drifting.

*From ‘No Country for Old Men’ – scene from the movie here: https://www.youtube.com/watch?v=XfRf8Pt2QTs