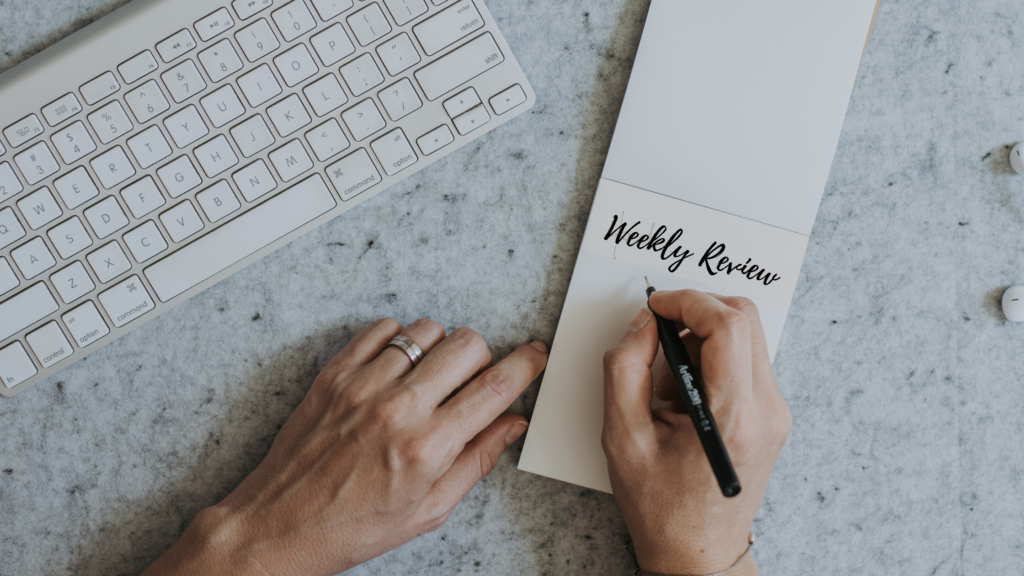 Enigma: a person or thing that is mysterious or difficult to understand (see Weekly Review®)

Variation: a different or distinct form or version of something

First, I should mention that many people who tell me they can’t stick with a Weekly Review habit are also those who don’t keep a good track of their Projects. This isn’t a surprise, as you need a good Projects list to get the main benefit of a Weekly Review and until you are regularly doing a Weekly Review, you won’t fully understand why you’re keeping a Projects list: chicken and egg.

Many parts of GTD® only really start to take off when people customise them to suit their own lives. Capture tools need to be ones you want to use; Next Actions and Desired Outcomes need to be written in a way that will make you engage with them, contexts for lists need to be modified to fit where you want to work and then organised in a tool you like. So, what variations can we make to the Weekly Review to make it more effective and more attractive for you?

When people are new to GTD, offering them too much ‘choice’ can make it harder for them to get going. This is why we present them with David’s ‘starter pack’ of context lists (@Agenda, @Calls, @Computer, etc.) and also why we teach them David’s 11-step checklist for the Weekly Review as though this is the only way to do a review.

Once you’ve been at this game for a while though, you’ll start to choose your own set of lists and recognise which parts of the Weekly Review give you the most bang for your buck, which parts you look forward to and, possibly, which parts you dread.

“Any reviewing is better than none at all. Don’t let yourself keep from getting back in the game because you don’t feel like you’re doing it 100%.” – David Allen

The three ‘stages’ of the Weekly Review offer a good framework to follow: Get Clear; Get Current; Get Creative. The remaining steps, however, can sometimes be shifted around if helpful to you.

Getting your ‘ins’ to empty should be happening every 24 to 48 hours. The Weekly Review is not the only time in the week where you attempt this. If it is, you’ll be dealing with backlog and it will either put you off attempting a Weekly Review altogether or tire you out before you get to the mentally demanding part of Get Current.

If you have backlog, make that a Project to deal with at another time and Get Clear for the last 24 hours then move on. Some people like to Get Clear the night before and then start their Weekly Review with Get Current the next morning.

Splitting the review into parts can help people be less daunted by it while building their habit. I will often do a Mindsweep during the week and then don’t feel it is necessary again in my review.

I’ve even recommended to some people who’ve admitted being put off their review by the getting clear part, to skip it entirely and get into reviewing their systems straight away. My hope is that they will start to experience the benefit this part brings and add other elements later.

David’s classic sequence in this part is especially useful for people who use a tool where Next Actions are not ‘tied’ to Projects. You look at all the actions first and then know immediately, when reviewing your Projects, which have actions and which don’t.

If you’re using a tool where Next Actions are linked to Projects, this order may not seem optimal. I have heard senior GTD coaches admit that they jump straight to look at their Projects list, as they have been working on their action lists all week and seeing their calendars and so they are keen to get the higher perspective of their Projects list first, which they may not have looked at all week, and then ‘work backwards’ from there.

“Review any relevant Checklists”: if you don’t have a Weekly Review checklist, make one. Start with David’s 11-step example and then review it each week at this point and tweak it to suit you. For example, in Get Clear, you may add to check OneNote, WhatsApp or MS Teams.

If you don’t have any other checklists, pause each week here and think of what could be useful to have a checklist for and draft one. (We cover checklists in detail on our Level 2 Seminar.)

“New hare-brained ideas”: just sit and see what thoughts come. If you struggle with this, create a Project to “look into creative thinking exercises”. Or, as I did in one Weekly Review, add a task to look up why it’s called hare-brained!

Weekly Reviews tend to take 60-120 minutes. Sometimes we want to also review some Higher Horizons, and this takes more time. If allocating the time for your Weekly Review is a blocking point for you then give yourself an hour, set a timer, and when that hour is up, stop – wherever you are in the process. The next week, you’ll want to get further, and you can rest assured it will not go on forever.

“Few people think more than two or three times a year. I have made an international reputation for myself by thinking once or twice a week.”—George Bernard Shaw.