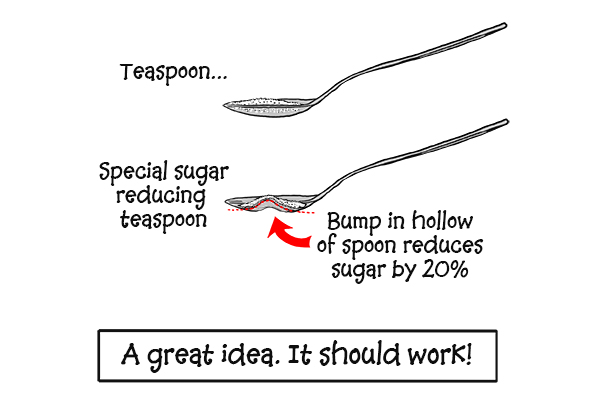 Fasten your seatbelts. We are almost a quarter of the way into the year, and so far it looks like another odd one. Global pandemics and political shenanigans aside, the first months of a new year have always offered an opportunity for making long-desired changes. Or they have, traditionally. I’ve heard a lot less about goal-setting this year. I think that’s because the main goal is a big ‘un: Let’s get through this thing without killing anyone we live with….

If you have set some other goals for this year, you definitely want a plan for reaching them that really works. I mention it because sometimes the accepted model for changing doesn’t work as well as its PR would have us believe.

If the proposed solution didn’t work at all, that would be easy. Everyone would say “That’s a waste of time. I’m not doing that, it’s bonkers.”

What is really challenging is when an ineffective solution is logical and easy to understand. It still doesn’t work, but because it is easier to understand than what does, people keep trying – and failing – to make it work.

Because of the time we live in, many will – again this year – have set a goal about losing weight. They’ve bought books, read articles and searched the internet for something that will work better than what they tried last year. They’ll find weight-loss plans that trot out the old, ‘move more, eat less’ schtick to create a deficit of calories. Implicitly, they are told that if only they were less slothful and gluttonous they’d not be so lardy. So they get to weighing and measuring, and calculating how many minutes on a treadmill cancels out that Mars bar after lunch.

The theory is elegant. The maths impeccable. It should work. Sometimes seems to. But the fact that pretty much everyone who tried it last year is doing it again this year indicates the proposed solution isn’t working. And it won’t work – can’t work – because the problem is metabolic, not caloric.

If you are using the ‘calories in/calories out’ model, then the spoon in the image above makes sense. It’s a real thing. As part of their sugar reduction strategy, one of the major supermarkets developed it to help people reduce the amount of sugar they put in their tea by 20%. If you just use the same number of spoonfuls as you usually do with a normal spoon, the bump in the base of the spoon will theoretically ensure you use less sugar. A great idea. It should work. And won’t, ever.

Similarly, for years we were sold a story that fat on your plate would turn into fat on your butt or gut, and in your arteries. It’s not true, but it was gospel for decades because it’s logical and easy to understand.

It isn’t just in the domain of diet. Here are some other things that make sense but don’t solve the real problem:

I could make the list much longer, but hopefully those examples illustrate the point.

In the domain of priortisation, there are at least two approaches that are similarly problematic. They make sense – and work in certain circumstances – but are not really useful in the cut and thrust of a modern business day.

First, there is the famous ‘Eisenhower matrix’, where tasks and projects are prioritised along two axes: ‘important’ vs ‘urgent’. If you cut those axes into four quadrants, and plot all your to-dos into them, the exercise will reveal whether something is ‘urgent but not important’, or ‘not urgent and important’ and so on. We are counselled to steer clear of the former, and focus on the latter. This is a beautiful, but unhelpful model. It makes great sense, and is useful in the abstract, but totally unusable in day-to-day prioritisation. Things are moving much too fast to be able to re-plot everything when new information arrives (as it does, many times per day…). 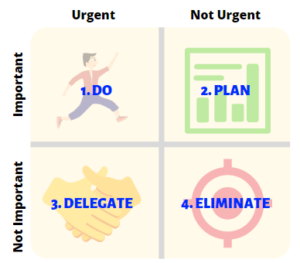 Then there is the ‘1, 2, 3’, or ‘a, b, c’ model of prioritisation, where everything on the list gets a priority number, and you go to work on the 1s before the 2s, etc. Again, it has a compelling logic, and I think it probably worked well enough back in the days when new inputs arrived once per day. Today, not so much. In order to keep the prioritisation up-to-date, you’d spend all of your time re-prioritising the list.

Fortunately there is something that does work: keep up-to-date lists of all of your commitments, review them regularly, then trust your gut as you decide what to do next. As I wrote in an earlier piece, this actually does work.

An example of where it works, in challenging circumstances under tremendous time pressure? The Accident and Emergency intake of any hospital.

How do they do it? They don’t assign priority numbers in the morning, or put things in quadrants at the beginning of the week, then try to work off that list. Instead, they keep a complete inventory of what they have in front of them and then prioritise dynamically, when new information shows up – as it does, all day long. If you want to save as many lives as possible, it is the only way that makes sense.

Why would you do it differently?