A penny for your thoughts - Next Action Associates
0 Items

A penny for your thoughts 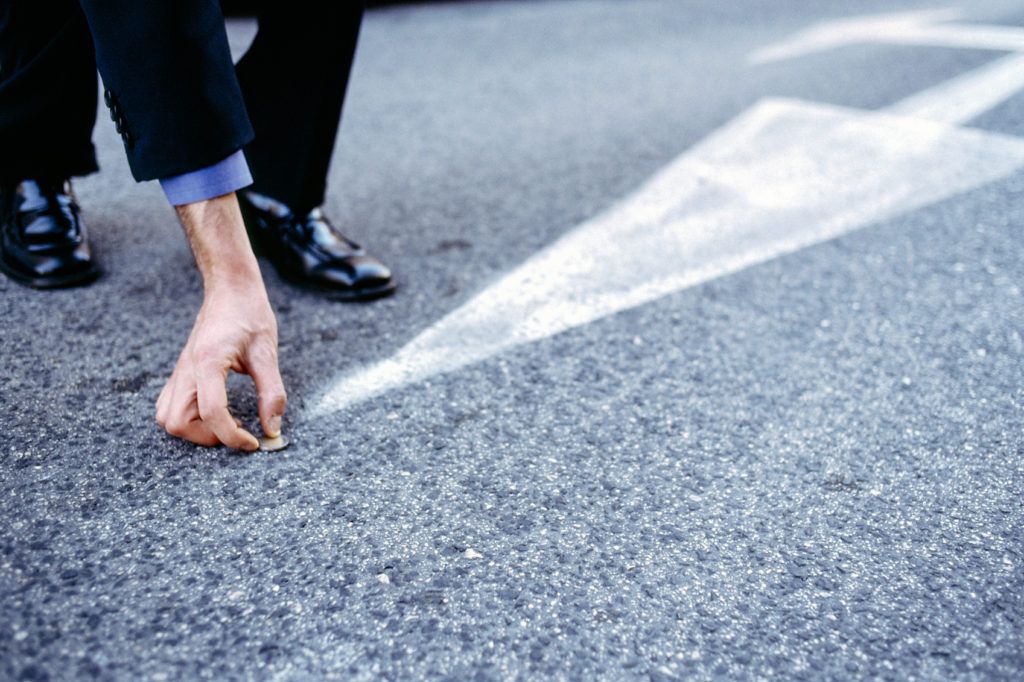 It’s a sun-filled summer afternoon and you’re strolling happily down the street when a flash of light catches your eye from pavement ahead. You instinctively tell yourself it’s probably just shiny litter but your eyes linger, widen and then sparkle with delight. Yes, it’s a pound coin.

So what do you do?

Although you might disguise your urban scavenging as shoelace-tying just in case you realise at the last moment that it’s a laundry token and have to abort, you’re probably going to pick it up, aren’t you? We all would. And why not? It’s right there. Free money. Ker-ching!

So why don’t we collect all our valuable ideas and shiny thoughts in the same way? Like coins in the street, they present themselves at random, unexpected moments and they have value – sometimes small (“must remember to get stamps…”), sometimes big (“yes! That’s what I’ll say in the board meeting!”).

All too often our unexpected ideas and insights are crowded out by the next distraction, and we let it happen, assuming they’ll still be there later. Of course, it’s possible they might, just like it’s possible that the glimmering pound coin might still be waiting there on the pavement when you pass by again tomorrow, but don’t bet on it.

This is why, when we’re teaching people the fundamentals of GTD, we stress the importance of having a robust and comprehensive system for capturing thoughts and ideas wherever they occur.

When you’re faced with city streets littered with coins of the realm, capture doesn’t present a problem. Unless you’re that naked rambler bloke – and welcome to our blog if you are – then you’ll have pockets. We all have them and coin collection is straightforward but capturing all the other stuff in our lives is more complicated.

For this reason, a key part of making your capture as effective as it can be is to consider customisation based upon your own habits and haunts, so that you’re always ready when the moment strikes.

I thought I’d share an example of this kind of customisation that works for me. It might seem a little unusual on the face of it, but this is what customisation is about – designing around your own customs.

A few days a week I make time for some laps up and down Manchester’s Olympic pool. As well as being a rearguard action against middle-aged spread, it also seems to prompt all manner of potentially useful thoughts to float to the surface of my consciousness as I crawl through the chlorine.

Unfortunately they often used to eventually drift away with frustrating frequency, too, until I realised that the simple-but-powerful GTD principle of always being ready for capture could apply in the pool just as much as in the other places I spend significant chunks of my day, such as home or work.

Acting on this realisation, I decided to buy a scuba diver’s underwater note-taking slate to park at the end of the pool; to instantly ensure that I’m never more than 50 metres away from grabbing the moments of insight and innovation that the exercise often encourages.

And it works. Idea for the next blog? Insight to unblock a project? Thing that needs buying for tea tonight? Splash, splash, scribble, scribble, done.

The point here is that one of the strengths of GTD is its flexibility. There is no mandated ‘one-size-fits-all’ when it comes to implementation. If you’re observing the principles – ubiquitous capture in this case – then you’re encouraged to develop and refine your practice in ways that work well for you, watery or not.

So, how about you? Would you like to share any customised elements of your system that are a little different but that you find really work well?